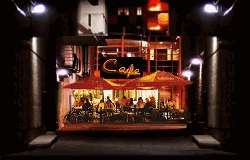 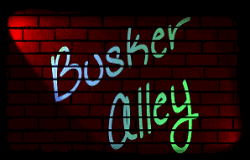 An endangered species, let's stroll down Busker Alley to see the Mimes. Telling a story in pure silence, the Mime is often misunderstood in their quest for expression.
3:17 -

Bob the Busker performs juggling and triple-wheel unicycle stunts. His finale includes the dangerous feat of balancing his Indo board on top of several stacked cylinders.
2:35 -

A busker is constrained in a straight-jacket and tied in a bag. He must then escape within 60 seconds while the crowd anxiously makes the countdown.
1:43 -

This stilt walker is none other than the Radio Active Elvis. Here, he parades in his white suit and blows fire for all to see in his grand finale.
1:00 -

Dan Looker is up on a table performing some acrobatic and hat tricks. He also mentions a new group he's started for recovering his sanity.
0:57 -

A standard practice, here a busker builds his crowd borrowing a little girl. The audience is to cheer in amazement growing the crowd into a sizable one.
0:31 -
>> CONTINUED >>
Page 1, 2